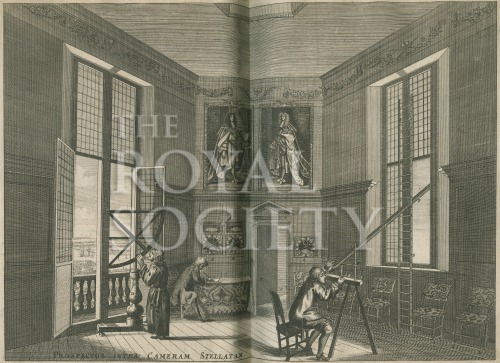 Image number: RS.10250
Credit: © The Royal Society
Looking for a special gift? Buy a print of this image.

The Octagon Room at the Royal Observatory, Greenwich

Interior view of the main observing room at the old Royal Observatory building, known as the star chamber or octagon room. The view shows three astronomers at work, one at a table making notes while two others use a quadrant (left) and a refracting telescope (right) to view the sky through open windows. At the back of the room are three inset clocks including (A and B) the pair of timekeeping instruments made by Thomas Tompion (1639-1713) for the observatory on the instruction of Sir Jonas Moore. These clocks are now in the British Museum and at the Royal Greenwich Observatory. Above them are portraits of Charles II and James, Duke of York, later James II.

Sir Jonas Moore (1617-1679) mathematician and patron of astronomy was elected a Fellow of the Royal Society in 1674.