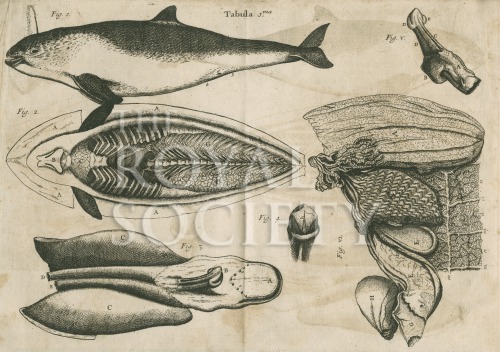 Image number: RS.10060
Credit: © The Royal Society
Looking for a special gift? Buy a print of this image.

Anatomy of the porpoise

Study of a porpoise, with details of its anatomy, based upon the dissection of the cetacean. This commenced at Garraway’s coffee-house and concluded at Gresham College in London, the first home of the Royal Society. The mammal was most likely the Harbour porpoise Phocoena phocoena. Six figures in total, numbered 1-6, variously in Arabic and Roman numerals on the plate. Figure 1 a lateral view of the whole animal. Figure 2 Section of the whole animal with viscera removed. Figure 3 The tongue, larynx and lungs. Figure 4 Detail of the opening of the larynx. Figure 5 The larynx and surrounding cartilage. Figure 6 Internal organs including stomachs, duodenum, pancreas and spleen.

Plate 1 from pamphlet Phocaena, or the anatomy of a porpess, dissected at Gresham Colledge: with a praeliminary discourse concerning anatomy, and a natural history of animals, by Edward Tyson (Benjamin Tooke, London, 1680).

Robert Hooke’s involvement is noted on p.10 of Tyson’s text: “I must acknowledge the kindness of my most Ingenious Friend Mr. Hook, and those worthy Persons, who gave me the opportunity of making the Observation; And his particular assisting me in designing several of the figures...” Original drawings for these plates survive in a manuscript [known as the “Tyson volume”], Royal College of Physicians MS/618.

Inscribed above “Tabula 1ma.” Not signed.