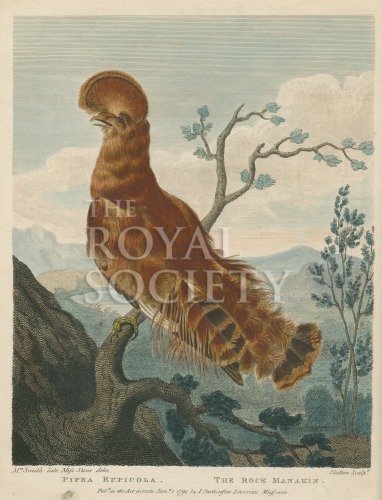 Image number: RS.10527
Credit: © The Royal Society
Looking for a special gift? Buy a print of this image.

Ornithological study of the Guianan Cock-of-the-rock (Rupicola rupicola) native to South America, shown perched on a tree branch above a bay or lake. This specimen is a male bird.

The accompanying text states that “When in a state of perfection it furnishes perhaps the finest example of the true colour croceus, or golden-orange, of any bird yet discovered...it is principally found in the province of Guiana and Cayenne in South America. The female is strikingly different in point of colour; being a uniform brown...”