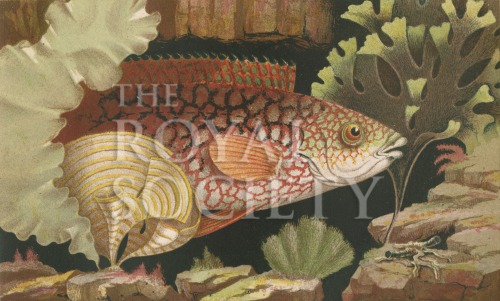 Underwater scene showing a wrasse identified by the illustrator as Labrus maculates, the Ballan wrasse, now classified as Labrus bergylta. The fish is shown with an overhanging rock forming a natural cavern and with several varieties of seaweed.

The accompanying text reads: ‘Great variety in the hues, and in their arrangement or pattern, is displayed by the Ancient Wrasse...One of the most beautiful varieties that I have seen...is that in which the green is almost obliterated, appearing only on the head...The Frontispiece to this volume represents such a specimen, a little less than the natural size...The Sea-weeds introduced into the picture are as follows: immediately in front of the fish is a plant of Chondrus crispus; below its breast is the wholly green Cladophora uncialis...Towards the left are seen two or three fronds of the curious and elegant Peacock’s Tail (Padina pavonia)...and arching over the back of the fish is a single leaf...of Punctaria latifolia.’

Frontispiece and plate 1 from the book The aquarium: an unveiling of the wonders of the deep sea, by Phillip Henry Gosse (Van Voorst, London, 1854). Inscribed: ‘Pl.1. P.H.Gosse, del. Hanhart, Chromo lith. THE ANCIENT WRASSE’.

Philip Henry Gosse (1810-1888) was a populariser of marine biology and an aquarium inventor elected a Fellow of the Royal Society in 1856.