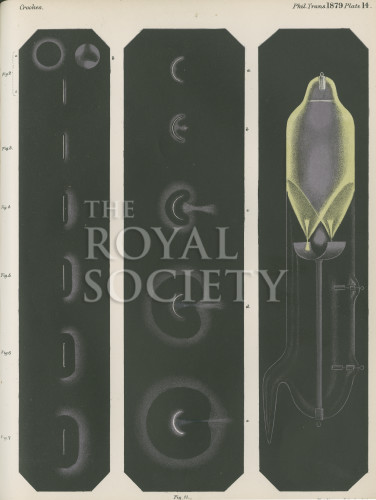 Illumination of a Crookes Tube

Three figures showing lighting effects in a vacuum tube during experiments conducted by William Crookes. The ‘Crookes Tube’ was a glass container through which high voltage could be applied within a partial vacuum. It was a type of cathode ray tube, projecting what J.J.Thompson (1856-1940) would later characterise as electrons. In the paper associated with this illustration, Crookes suggested that: “The phenomena in these exhausted tubes reveal to physical science a new world – a world where matter may exist in a fourth state…”, what would now be termed plasma.

Figure 11 from the Royal Society Bakerian Lecture “On the illumination of lines of molecular pressure, and the trajectory of molecules”, by William Crookes. Philosophical Transactions of the Royal Society, vol.170 pt.1 (1879) pp. 135-164.