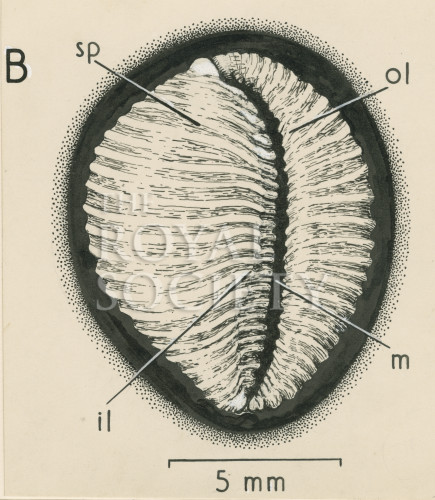 Zoological study of an adult specimen of the European or spotted cowrie Trivia monacha a sea-snail native to European coasts and the Mediterranean Sea. The marine gastropod is presented with a 5mm. scale and shows a concealed spire (convolute).

Detail B from figure 28 of the book British prosobranch molluscs: their functional anatomy and ecology by Vera Fretter and Alastair Graham (London, Ray Society, 1962).

Both Graham and Fretter contributed high-quality illustrations to British prosobranch molluscs and artist attribution can be difficult. Graham’s Royal Society Biographical Memoir states that: “Dr Fretter drew the ‘whole animals’, and Graham most of the dissections and histological preparations. She concentrated on the reproductive system, larvae and shore ecology, and he on other aspects.”

Not signed. One of three figures pasted on a single sheet to make up a plate and annotated in ink: ‘Fig 28 Trivia monacha set across page x1/2’.