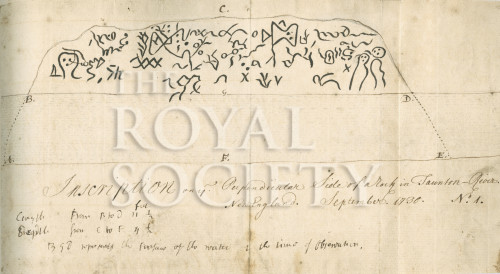 Elevation drawing of Dighton Rock. The artefact was originally lodged on the tidal riverbed of the Taunton River at Berkley, Massachusetts, USA. It was later moved to its own museum at Dighton Rock State Park. The boulder’s surface inscriptions, or petroglyphs, have been attributed at various periods to Native Americans and to Norse and Portuguese voyagers.

Pasted into the manuscript copy of ‘An account of an inscription in unknown characters found in a rock in Taunton River in New England communicated in a letter to Mr John Eames FRS’ by Isaac Greenwood. The drawing is not signed but is inscribed below: ‘Inscription on the Perpendicular Side of a Rock in Taunton River. New England. September 1730. No.1.’ A key provides dimensions of the stone and a line of water level (B-G-D) when the drawing was made.

Isaac Greenwood (1702-1745) was the first Hollisian Professor of Mathematics and Natural Philosophy at Harvard College.