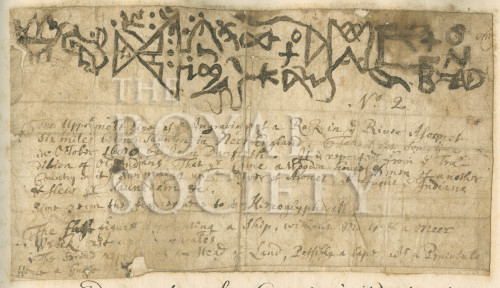 Drawing of the upper part of the inscriptions or petrogylphs on Dighton Rock. The boulder was originally lodged on the tidal riverbed of the Taunton River at Berkley, Massachusetts, USA, and was subsequently moved to its own museum at Dighton Rock State Park. The object’s surface inscriptions have been attributed at various periods to Native Americans and to Norse and Portuguese voyagers.

Pasted into the manuscript copy of ‘An account of an inscription in unknown characters found in a rock in Taunton River in New England communicated in a letter to Mr John Eames FRS’ by Isaac Greenwood. The drawing has a long inscription below, commencing: ‘The Uppermost Line of the Ingraving of a Rock in the River Assonnet six miles below Taunton in New England. Taken out Sometime in October 1680 by John Danforth…’ The inscription recounts a Native American tradition of ‘a Wooden house of men of another Country’ on the river.

John Danforth (1660-1730) known as a Puritan poet and author attended Harvard College before becoming Pastor of the congregation at Dorchester, Massachusetts, in 1682.