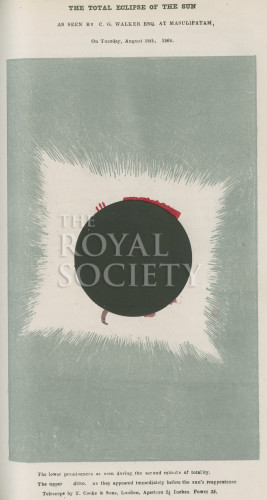 Total eclipse of the Sun

View of a solar eclipse by telescope, showing the solar corona and prominences. Seen from Masulipatam, now Machilipatnam in Andhra Pradesh, India.

From the pamphlet Report of the Government Astronomer upon the proceedings of the Observatory, in connexion with the total eclipse of the Sun on August 18 1868, as observed at Masulimpatam, Vunpurthy, Madras, and other stations in Southern India, by N.R.Pogson (Madras, 1869).

The print is inscribed above: ‘THE TOTAL ECLIPSE OF THE SUN AS SEEN BY C.G.WALKER ESQ. AT MASULIPATAM, On Tuesday, August 18th, 1868.’ Inscribed below: ‘The lower prominences as seen during the second minute of totality. The upper ditto as they appeared immediately before the sun’s reappearance. Telescope by T.Cooke & Sons, London, Apeture 2 ½ Inches. Power 35.’