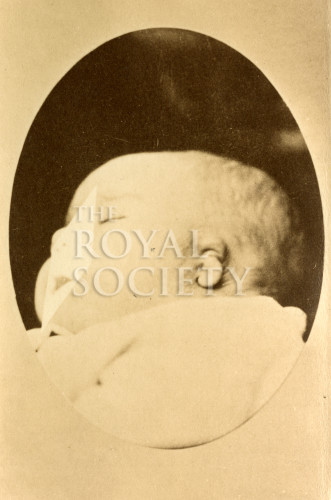 Portrait of a child of F.G.

Head and shoulders portrait, oval, of a baby with microtia, an underdevelopment (from birth) of the pinna, or outer ear. The child faces to the left as viewed, face partly obscured.

One of three medical case studies from the paper ‘Microtia’, by David Hunt, The American Journal of Otology: a quarterly journal of physiological acoustics and aural surgery, edited by Clarence J. Blake, v.3 (1881), pp.3-11.

The accompanying text describes the patient’s condition: ‘Case III. - Infant child of F.G. The auricle is divided into a superior and an inferior portion by a fissure which occupies about the same relative position as the indentation of Cases I and II. The lower portion looks like a hypertrophied lobules; the upper portion consists of two nearly concentric folds, united at their posterior extremities; the upper border of the superior fold shades off into the common integument.’

The photograph is uncredited, however the author states that ‘By the courtesy of Dr. Clarence J. Blake, I have been afforded the opportunity of inspecting photographs of three cases of malformation of the auricle.’