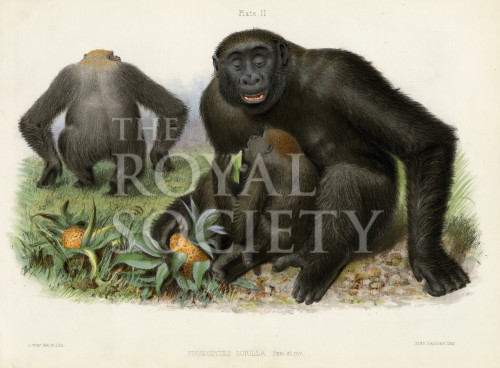 Natural history study of a three gorillas from Gabon in West Africa, probably Western lowland gorillas Gorilla gorilla gorilla, (here referred to as Troglodytes gorilla). An adult female is shown accompanying a juvenile male, the later eating pineapple leaves. An adult male walks behind these two, back to the viewer.

Plate 2 from the book Memoir on the gorilla (Troglodytes Gorilla, Savage), by Richard Owen (Taylor and Francis, London, 1865).

The plate is described as showing an ‘Adult male Gorilla, showing the ordinary quadrupedal mode of progression. Adult female Gorilla. Young male Gorilla. (From Mr. Du Chaillu’s collection, purchased by the Trustees of the British Museum.)’ The author states that: ‘The above figures were drawn by Mr. Joseph Wolf, for the illustration of the present Memoir, and lithographed in 1861.’

Sir Richard Owen (1804-1892) British comparative anatomist and paleontologist, was elected a Fellow of the Royal Society in 1834.