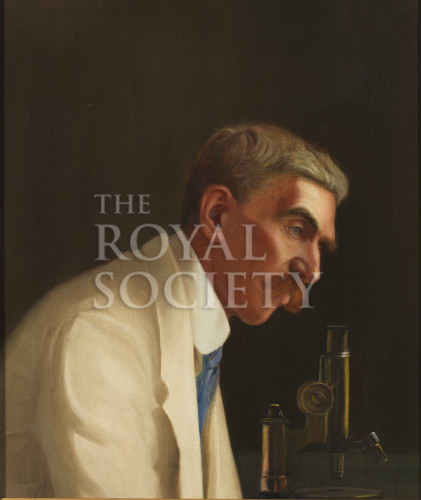 Head and shoulder portrait in profile of Sir Leonard Rogers seated at a laboratory table with a microscope. Rogers is shown wearing a light, tropical dress jacket with a white shirt and blue tie.

Sir Leonard Rogers was a specialist in tropical diseases, he was elected a Fellow of the Royal Society in 1916.

From the Rogers family, who also possessed a studio copy of the photograph upon which the painting seems to be based. No other details of the picture were known. [1]

The portrait is based upon an earlier photographic study ‘The author in his laboratory in India’ which appears as a plate 4 in Rogers’ autobiography Happy toil [2]. This image is not credited or dated in the book but presumably shows Rogers in Kolkata (Calcutta) where he was deputy sanitary commissioner in the Bengal Civil Medical Department from 1900 and Professor of Pathology in the Calcutta Medical College from 1906.

Roger’s autobiography (pp.185-186) outlines a succession of honours in the period 1916-1918 including Fellowship of the Royal Society (1916) and the commissioning of a marble bust (1917) for the Calcutta School of Tropical Medicine. Rogers also notes that ‘An oil painting by Major R.E. Lloyd, I.M.S., is in my possession, based on the photograph which was taken by him….’ The combination of photograph and painting makes this is almost certain to be the picture produced by Major R.E. Lloyd who was Professor of Biology at the Calcutta Medical College during this period [3].