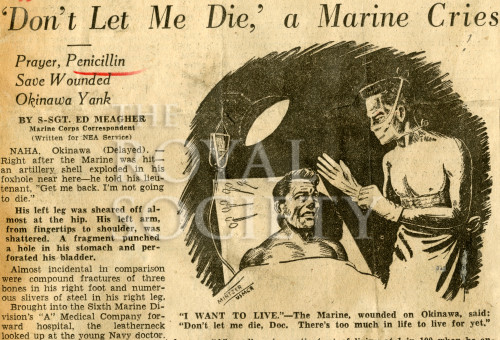 Cartoon graphic of a wounded U.S. Marine, from the Battle of Okinawa in an operating theatre appealing to a surgeon [identified in the text as U.S. Navy Lieutenant (j.g.) William C. Manion] before being administered penicillin.

Captioned: ‘ “I WANT TO LIVE.” The Marine, wounded in Okinawa, said: “Don’t let me die Doc. There’s too much in life to live for yet.” ‘Signed lower left: ‘MINTZER USMCR.’

Joseph W. Mintzer, born in Philadelphia, USA and enlisted in the USMR in 1941. Active in the Pacific Theatre and exhibited in ‘Marines Under Fire’ at MOMA, New York, November 1943-January 1944.