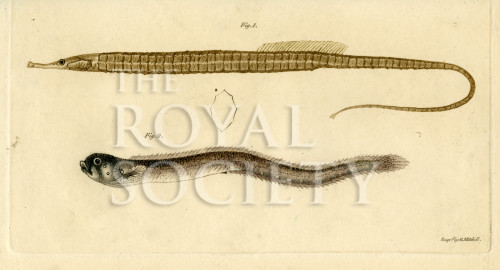 Of figure 1, the accompanying text states that: ‘This fish was taken at Salcomb, in the year 1807, and selected from the common species, by a fisherman in the habit of collecting for me, and who remarked he had never before seen one of the kind.’

Of figure 2, the accompanying text states that: ‘This species of Ophidium may be considered as one of the most rare of the British Isles…all we know, therefore is that it was taken at Weymouth.’

George Montagu (1753-1815) naturalist and army officer, was a Fellow of the Linnean Society. He described several British molluscs and fish for the first time.