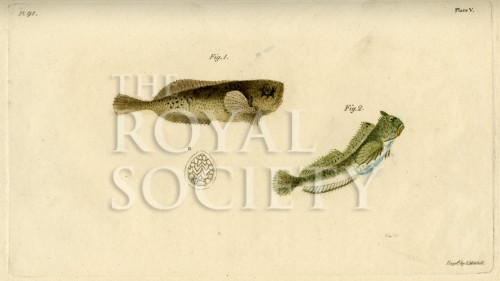 Of figure 1, the accompanying text states that: ‘those I have obtained, were taken at extraordinary low tides, among the rocks at Milton, on the south coast of Devon’.

Of figure 2, the accompanying text states that: ‘Not fewer than eight or ten of this species have come under my inspection, the greater part of which did not exceed an inch and a half in length…This…is occasionally taken…among the rocks of the south coast of Devon.’

George Montagu (1753-1815) naturalist and army officer, was a Fellow of the Linnean Society. He described several British molluscs and fish for the first time, including these two fishes which are named in his honour.