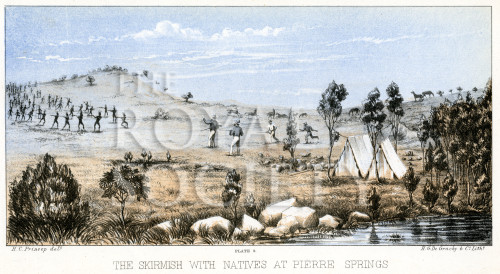 Landscape view showing an incident in the Western Australian Exploring Expedition of 1874. A group of encamped expedition members, who are armed with rifles, are shown in confrontation with a group of Martu people.

Figure 9 from the monograph Journal of the proceedings of the Western Australian Exploring Expedition through the centre of Australia…commanded by John Forrest (Richard Pether, Perth, 1875).

According to the accompanying text, the view shows events of 13 June 1874: ‘About one o’clock Pierre saw a flock of emus, coming to water and went off to get a shot…I was surprised to hear natives’ voices, and looking towards the hill I saw 40 to 60 natives running towards the Camp, all plumed up and armed with spears and shields…the whole number made a rushing towards us with their spears shipped, and yelling and shouting. When within 30 yards I gave the word to fire; we all fired as one man.’ Forrest considered that at least two Australians were wounded, and possibly killed by the Expedition.

Forrest commented upon these illustrations: ‘Owing to my absence in England while Mr. Prinsep was engaged making the drawings from my rough field sketches, the names of some of the views were inserted erroneously…’ This view was captioned incorrectly: Forrest explains it as ‘Attacked by Natives at the Weld Springs.’

The Martu (Mardu) are a grouping of several Aboriginal Australian people traditionally inhabiting a large part of Central Western Australia, which extends from the Great Sandy Desert in the north to Wiluna in the South.