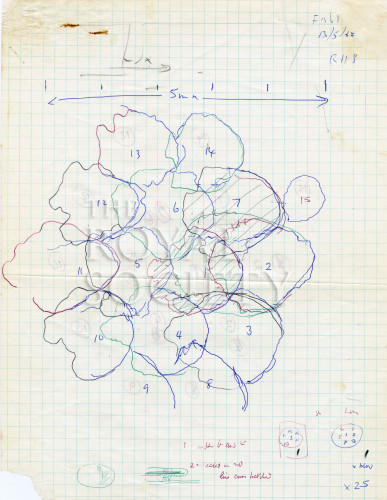 Anatomical drawing of a 5mm section of interlocking fish scales under magnification. The surface image (possibly from a salmon) was part of an investigation into the reflective nature of fish skin. The scales are numbered 1-15.

From a notebook kept by Eric Denton at the Marine Biological Associations’ Laboratory at Citadel Hill, Plymouth. Inscribed above right: ‘Fish 1 13/5/69’.

An account of these researches on the silver colouring of fish is given in ‘Sir Eric James Denton…’, by Malcolm R. Clarke, Biographical Memoirs of Fellows of the Royal Society, v.55 (2009) pp.59-76.‘They then found that differences in reflection from different parts of a fish were the result of different orientations of the reflecting crystals in the skin, and this greatly enhanced their camouflage when viewed from any direction. They showed the mechanism of reflection to be related to the orientation of guanine crystals on the scales, and contrasted the structure in a variety of silvery teleosts…’

Sir Eric James Denton FRS (1923-2007) British marine biologist and physiologist was elected a Fellow of the Royal Society in 1964.