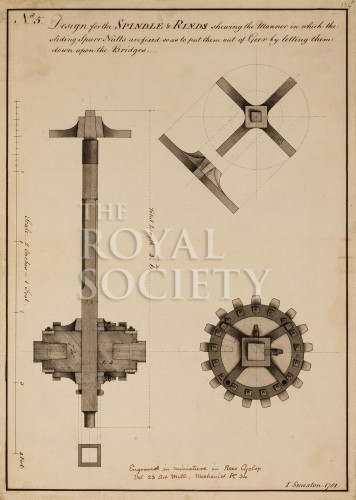 Plan and elevations for the spindle, rhynd and sliding spur nut, for the Red House mill at Deptford, London, at a scale of 1:6.

Signed at dated lower right and inscribed ‘Design for the SPINDLE & RINDS shewing the manner in which the sliding Spurr Nutts are fixed so as to put them out of Geer by letting them down upon the Bridges.’ Further inscription by John Farey ‘Engraved in miniature in Rees Cyclop Vol 23 Art Mill, Mechanics Pl 34.’