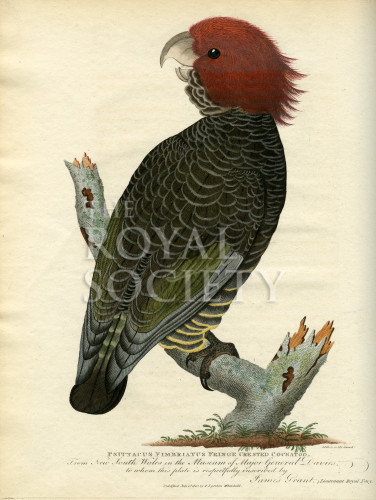 Ornithological study of the Gang-gang cockatoo Callocephalon fimbriatum, described here as the Fringe crested cockatoo Psittacus fimbriatus. The bird, a native of Australia, is shown perched on a low-lying branch.

Plate 2 from the book The narrative of a discovery…performed in his Majesty’s vessel the Lady Nelson…to New South Wales, by James Grant (London, for T. Egerton, 1803).

The accompanying text states that: ‘we were fortunate enough however to fall in with some rare and uncommon cockatoos, one of which Mr. Barreillier shot, and a faithful representation of it will be found in the annexed Plate, after a design from the elegant pencil of Major-General Davies of the Royal Artillery, to whom Governor King presented the preserved specimen.’