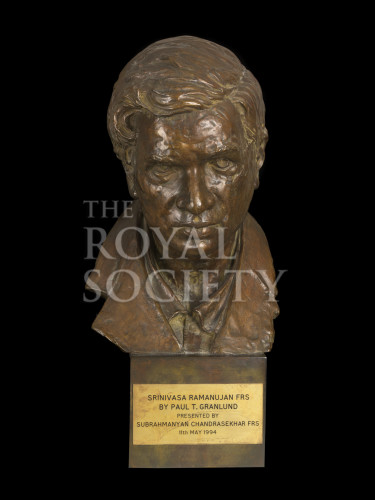 Bust of Srinivasa Ramanujan, head and partial shoulders showing shirt and the collar of a jacket. He is facing forward and his hair is styled in right parting as viewed. On a bronze pedestal.

Srinivasa Aaiyangar Ramanujan (1887-1920) was an Indian mathematician, he was elected a Fellow of the Royal Society in 1918.

Provenance: Presented to the Society by Subrahmanyan Chandrasekhar FRS, 1994

Copies and cast: One of four busts originally commissioned by Richard Askey. An additional five made since the original commission as recorded in the paper On Ramanujan’s Bust by S Chandrasekhar, F.R.S. Notes and Records of the Royal Society London, volume 49, page 153-157.