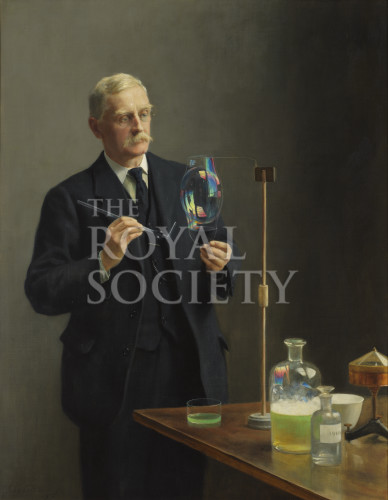 Three-quarter length portrait of Charles Vernon Boys shown in the act of creating a soap bubble, standing before a wooden bench, upon which is a variety of demonstration equipment. Boys wears a blue suit with a waistcoat, the watch chain visible, and a blue tie, with a white shirt. He has spectacles and a moustache. In his right hand is a glass tube; his left holds the support for the iridescent bubble, the upper part of which is joined to a laboratory stand. On the bench are various chemical jars containing the liquid mix, including a labelled ammonia bottle. To the lower right is a ‘rainbow cup’ on a tripod, a device of Boys’s invention.

Charles Vernon Boys (1855-1944) British physicist and inventor, elected a Fellow of the Royal Society in 1888.

The picture was hung in the family home of St Mary Bourne in Hampshire, where a 1936 image shows the painting in C V Boys’s workshop, converted from his home’s sitting room [1]. John V. Boys (C.V.’s grandson) inherited the work which was at his home in Dorset until the painting’s donation to the Royal Society. A preliminary approach was made to the Society in 2004 [2] and the work was formally offered in June 2017 [3]. The picture arrived at the Royal Society on 27 July 2018, accompanied by manuscripts and books relating to Charles Vernon Boys.

John V, Boys describes the work as ‘painted in 1915…and is a reconstruction of his demonstrating with soap bubbles at lectures for the young at the London Institute at New Year 1889/1890 and at the Royal Institution Christmas Lectures 1899/1900.’