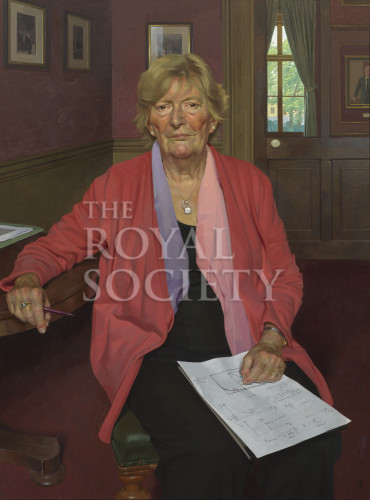 Half-length portrait of Dame Julia Higgins, facing the viewer, seated on a green leather and oak library chair, her right arm leaning upon a semi-circular table. A pencil held in her right hand: in her left hand, a draft scientific paper with a graph, headed ‘size of initial phase’. Dame Julia is dressed in black trousers and blouse, with a cerise pink cardigan matched with a blue and pink scarf. The sitter is shown in a wainscoted room of the Reform Club, on Pall Mall. Behind, through a window, is a glimpse of Carlton House Terrace.

Dame Julia Higgins, British polymer scientist, elected a Fellow of the Royal Society in 1995. She served on the Council from 1997 and was appointed Foreign Secretary from 2001.

The work was framed by Darbyshire in late June 2017 and unveiled at the Royal Society on 11 January 2018.