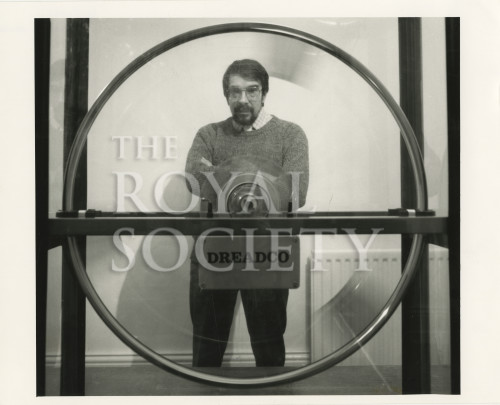 Portrait of David Jones and his 'perpetual motion machine'

Portrait of David Jones standing behind one of his bicycle wheel 'perpetual motion machines' with folded arms.

From the David Jones collection. Jones (1938-2017) was a research chemist and science writer. His alter ego, Daedalus, specialised in stretching the limits of science. His fake perpetual motion machines are one example of this.

This 'pereptual motion machine' was the first of a series of bicycle wheel machines created by Jones that deliberately concealed their mode of motion. It was created on the request of New Scientist Magazine for a meeting of the British Association for the Advancement of Science in York, 1981. It was later displayed in the Physical Chemistry Department of the University of Newcastle upon Tyne, where members of the public were invited to guess how it worked.