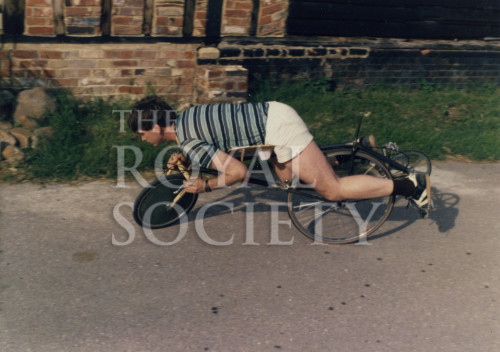 Photograph of one of David Jones' 'abnormal' bicycles

Unknown rider riding an 'abnormal' bicycle, constructed as part of David Jones' research on bicycle stability. The rider lies on their front, head first and tilted upwards. Their torso is supported by a wooden board and the pedals are situated behind rather than below them. Camera height is slightly above the rider.

From the David Jones collection. Jones (1938-2017) was a research chemist and science writer. He was not a Fellow of the Royal Society.

In 1970 Jones wrote an article for 'Physics Today' in which he investigated the reasons for a bicyle's stability. In order to identify these reasons he constructed a series of abnormal bicycles which lacked certain features. This is one example, where Jones experimented with lowering the centre of gravity of the bicycle.