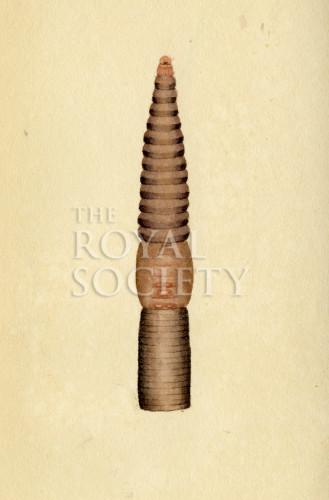 Head of an earthworm

Study of the mouth, clitellum and part of the main body of an earthworm Lumbricina. Segments on main body are drawn in and interior of the clitellum is visible under the surface.

From the papers of Alfred Gibbs Bourne, which record his studies into the anatomy and development of the species of earthworm he encountered while in South India.

Alfred Gibbs Bourne British zoologist was elected a Fellow of the Royal Society in 1895. He began his career as assistant to Ray Lankester, and was later appointed chair of Biology at the Presidency College, Madras.

Bourne published two paper on earthworms in the Proceedings of the Royal Society: 'Contributions to the anatomy of the hirudinea' and 'On the occurrence of a hydroid phase of Limnocodium Sowerbii, Allman and Lankester'.