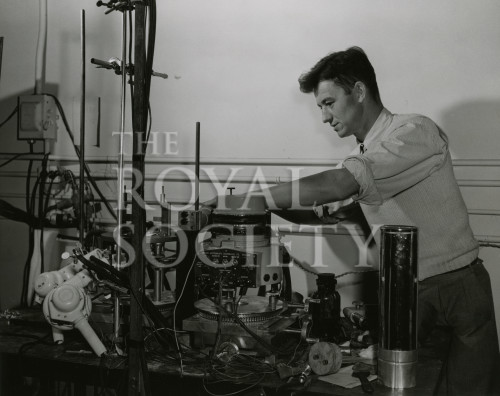 Portrait of Dr. William B. Pearson

The National Film Board of Canada, Photographer

Half portrait of Dr. William B. Pearson standing behind a crowded desk. He leans to adjust the low temperature x-ray camera in front of him. Taken in the Canadian National Research Council’s [NRC] Low Temperature Laboratory, a Laboratory intended to facilitate extreme low temperature physics.

Inscribed on the reverse in ink: ‘The National Film Board of Canada. This is a Canadian Government photograph and may not be used for any advertising or commercial purpose without specific clearance and permission. Credit N.F.B.’

Pearson (1921-2005) worked at the Canadian NRC in Low Temperature Physics and later at the University of Waterloo as Professor of Physics and of Chemistry.

From the papers of Franz Eugen Simon. Simon was elected a Fellow of the Royal Society in 1941.

It is one of a series of seven photographs sent to Simon in 1955 by David Keith Chalmers MacDonald. MacDonald moved from Oxford to Ottowa in 1951 to set this laboratory up in the Low Temperature and Solid-States Physics Section of the Canadian NRC.