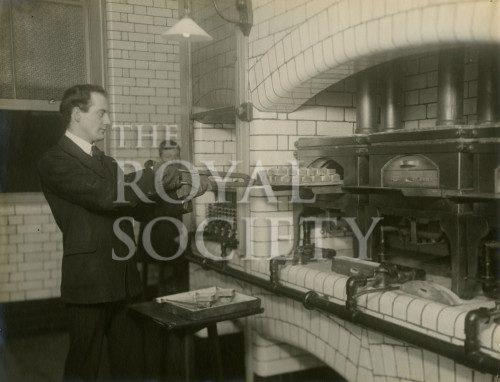 An unnamed chemist removes tobacco-testing apparatus from an oven in the Government Laboratory, Clements Inn Passage, London. He stands back from the oven, holding the apparatus at arm’s length, his face in right profile, wearing a black suit and protective gloves. His colleague looks on from the background.

The Government Laboratory was established in 1842 for the prevention of adulteration of tobacco products.

A photograph taken in the government laboratories near the Law Courts. The chemist is clearing a muffle in which tobacco is tested. The little metal tins like patty pans which are seen being drawn from the oven are made of platinum and are worth nearly £300 per set. The tobacco to be tested is placed in these platinum dishes and subjected to great heat the ash is then examined to see whether there is an undue proportion of foreign matter used in the manufacture of the tobacco.

From the papers of Thomas Thorpe. Sir Thomas Edward Thorpe (1845-1925), British chemist served as Chief Chemist to the British Government, as Director of the Government Laboratory, from 1894 to 1909. He was elected a Fellow of the Royal Society in 1863.