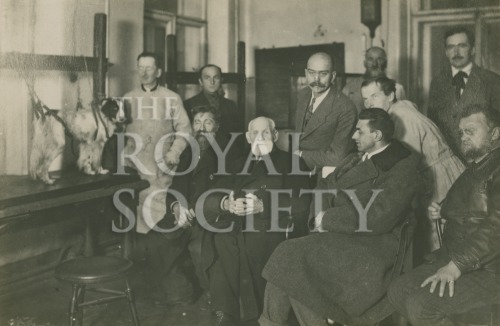 Ivan Pavlov seated at the centre of a group of researchers, his hands in his lap, looking directly into the camera. To the left as viewed is a dog standing on a laboratory bench, supported by a harness used in conditioned reflex experiments.

An original typescript caption verso reads: “Doctor and some of his assistants in his Laboratory. The temperature is about zero and it is necessary to wear fur coats. Seated in front are Profs Pavlov, Stepanov, Savitch and Doctor Gantt.”

One of a group of nine photographs sent to Thomas Renton Elliott FRS (1877-1961), apparently by Pavlov and presented by Elliott to Hugh Sinclair in 1945-1946.

Possibly taken at the Institute for Experimental Medicine, St Petersburg, Russia. Pavlov was the Director of the Institute’s Physiology Department from 1890 until the end of his life.

Ivan Petrovich Pavlov (1849-1936) Russian physiologist was elected a Foreign Member of the Royal Society in 1907.