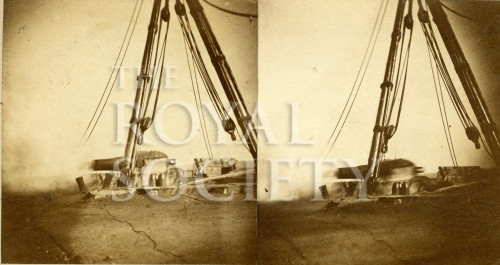 Stereoscopic view of an artillery piece being fired at the Royal Woolwich Arsenal, England. The weapon, possibly an Armstrong gun, has fired but has not yet recoiled. The view includes three shells and a block and tackle A-frame. A wire is also visible, presumably the source of electrical current used to trigger the camera.

The image was sent by Frederick Abel to Charles Vernon Boys and is inscribed by Abel verso: ’Taken at Woolwich Arsenal – early in 1866.’ An associated letter by Abel notes that the apparatus was set up by Sergeant P Mckinlay, Royal Artillery Proofmaster at Woolwich. A description [by Abel, or Mckinlay?] states that ‘the same galvanic current which fuses a small platinum wire in it, and by which the gun is discharged, is also used, at the same time, to open and shut the camera by the employment of electro magnets.’

Sir Frederick Augustus Abel (1827-1902) chemist and explosives expert, was elected a Fellow of the Royal Society in 1860.

Sir Charles Vernon Boys (1855-1944) British physicist and inventor, was elected a Fellow of the Royal Society in 1888.

From the papers of Charles Vernon Boys, donated by John V Boys, 2018.