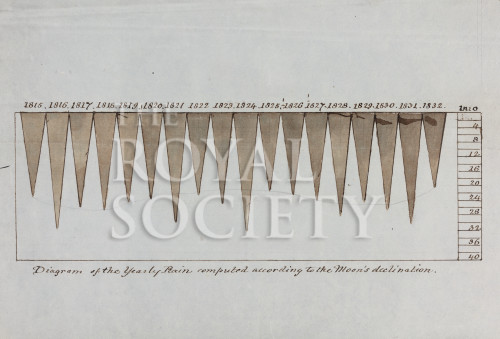 Graph detailing the rainfall in London over a period of eighteen years in the nineteenth century. The year is listed on the horizontal axis and the average rainfall is listed on the vertical axis. The years span from 1815 to 1832, while the rainfall, measured in inches, increases from 0 to 40 along the vertical axis. 1824 appears to have had the highest levels of rainfall, with an average of 32 inches.

Inscribed in ink: ‘Diagram of the Yearly Rain computed according to the Moon’s declination’.

Diagram 1 from a paper sent to the Royal Society by Luke Howard, ‘On the proportions of the prevailing winds, mean temperature and depth of rains, in the climate of London’. In the accompanying text, Howard writes that the ‘rain of our climate’ appears to be affected by the position of the moon: ‘there falls more rain (by measure) in the weeks in which she is South of the equator; and least when she is passing over it southward’.

Luke Howard (1772-1864) British manufacturing chemist and meteorologist was elected a Fellow of the Royal Society in 1821.