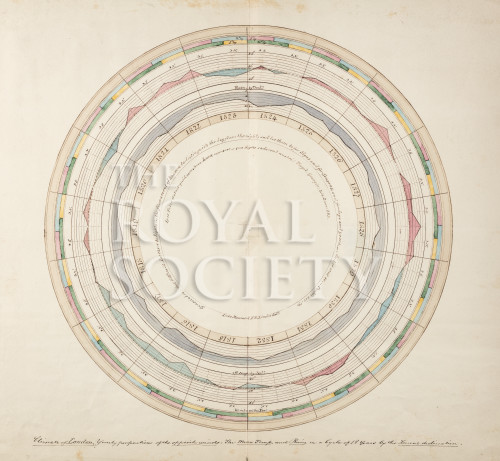 A line graph is used to indicate the average rain depth and temperature, while different coloured bars - green, pink, yellow and blue - are used to represent the different directions of wind.

Ink inscription inside the circle: ‘Genesis i.14 And GOD said let there be lights in the firmament of heaven to distinguish the day from the night; and let them be for Signs and let them be for Seasons, and for days and years.__ And it was so.___ Psalm civ 19. Luke Howard F.R.S.’

Ink inscription below the circle: ‘Climate of London. Yearly proportions of the opposite winds, the Mean Temp and Rain in a Cycle of 18 years by the Lunar declination.’

Diagram 3 from a paper sent to the Royal Society by Luke Howard, ‘On the proportions of the prevailing winds, mean temperature and depth of rains, in the climate of London’.

Luke Howard (1772-1864) British manufacturing chemist and meteorologist was elected a Fellow of the Royal Society in 1821.