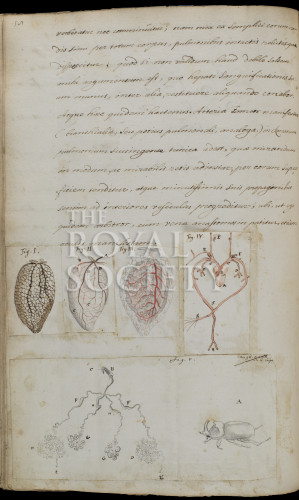 According to Swammerdam:
'Figure I expresses graphically the network of cells in the lung, swollen with wax.
Figure II shows the pulmonary artery on the surface of the lungs, with its innumerable anastomoses: A is the trunk of the pulmonary artery, BBB its triple ramification, CC the mutual anastomoses of the pulmonary artery.
Figure III denotes the pulmonary vein.
Figure IV expresses certain arteries of the frog: A is the heart with its auricles, B the stem of the aorta springing from the arteries, EE the elegant arteries, welling out into a bulb an then constricting again, F a noble anastomosis of the branches descending from the region of the mesentery, G the mesenteric arteries, H the iliac branches, I small glands in the neck. [...]
Figure V expresses the life of the genitalia of the horn-nosed beetle. A the beetle, B the horny part of the penis, C the place from which the penis protrudes when erect, DD the testes, consisting of a single thread, two foot six inches long, EE the blind beginning or origin of the testes, FF the vasa deferentia, exuding a copious white semen when they are wounded, GG six very well contrived seminal vesicles, or rather glandules, HH the extended ducts of the seminal glandules, containing a yellowish seminal matter, as I have observed in men and brute creatures also.'
(From the translation by A. Rupert Hall and Marie Boas Hall in The Correspondence of Henry Oldenburg, 13 vols (Madison: University of Wisconsin Press, 1965-85), IX, 524.)