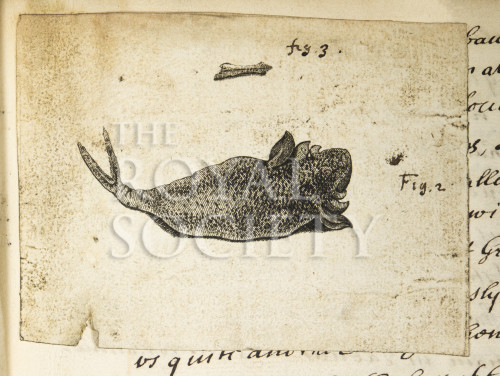 An animal vomited by a baker

Two figures, an animal and the head of another that were found in the vomit of Mr Lund, a baker in York. Martin Lister thought Lund might have swallowed an embryo of a toad or a newt while drinking pond water. From a letter by Lister to Hooke dated 21 March 1682.

At the meeting of the Royal Society on 29 March 1682, ‘Mr. Hooke read a letter to himself from Mr. Lister, dated at York 21 March 1681/2, giving an account of a patient of his, who had for about the space of four months been troubled with great pains, and sometimes with horrors and chillnesses, and at last with a most violent vomiting, with which he cast up a great quantity of blood; and in that a strange creature, the shape of which was particularly described by him in words and by a figure, and thereby shewn to be different from that of any other creature ever seen by him. He endeavoured to give some probable conjectures as the cause of the monstrous production, supposing it to have been generated out of some seminal water swallowed in pond-water, which he often drank, when wearied with labour in his employment, which was that of a baker. The strangeness of this relation, with the attestation of it by Mr. Lister, as it pleased the Society, so it occasioned much discourse concerning the reason of such strange kinds of monstrous productions’ (Birch 4:138).