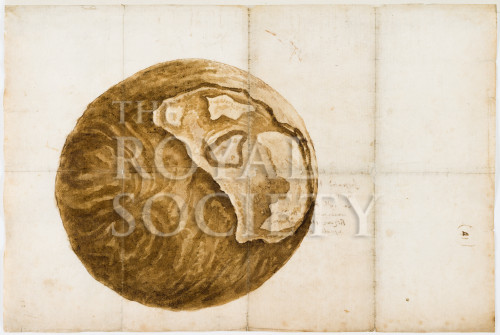 This image of a bezoar stone accompanies a text translated from Dutch to French, and signed by the notary and translator Jacobus van de Ven on 18 September 1636.

The text describes a bezoar stone as witnessed by several Dutch physicians in 1636. This manuscript was presented at the meeting of the Royal Society on 19 August 1663 by Edward Waterhouse, the son of a fishmonger and great-nephew of Sir Edward Waterhouse, chancellor of the exchequer in Ireland, who had been nominated to the Fellowship of the Society by John Wilkins.

At the meeting of the Royal Society on 19 August 1663, ‘Mr. Waterhouse presented the society with a manuscript attested by a public notary of Amsterdam, containing the relation of an [o]ccidental bezoar of an extraordinary size, weighing near seven pounds, and having been formerly tried at Amsterdam (where a certain citizen was possessor of it) by several physicians, apothecaries, and druggists of the said city, to be a true natural bezoar. This paper was ordered to be filed up’ (Birch 1:293).