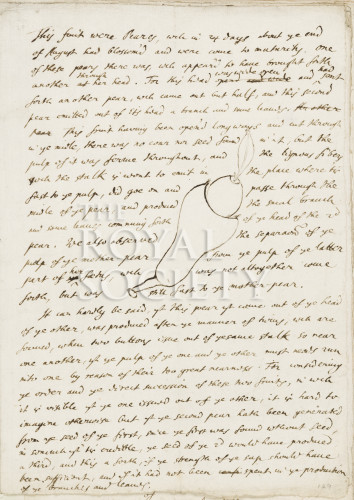 At the meeting of the Royal Society on 7 March 1700, a report about a pear which had another fruit growing out of it with a leaf was read. This is likely the original paper, with a drawing of the double pear.

This first were Peares, which in 24 days about the end of August had blossom'd and were come to maturity. One of these pears there was, which appear'd to have brought forth another through her head. For this head was wide open and had sent forth another pear, which came out but half, and this second pear emitted out of its head a branch and some leaves.
Transcribed by the Making Visible project