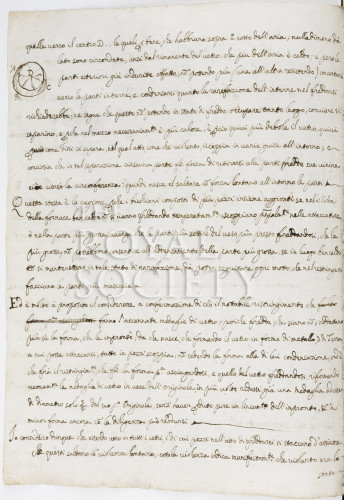 The breaking of a glass medallion

This 'Philosophical Letter to the Grand Duke of Tuscany' describes several experiments on the making of glass droplets and glass 'worms' that, when they break, become pulverised glass immediately. The experiments vary the temperature in the oven, the weight of the glass, its thickness etc.

The letter was written after the carnival of 1669 (see p. 2 of the document for this reference). This is most likely a copy of the letter by Geminiano Montanari to the Grand Duke of Tuscany, sent to the Royal Society.

This drawing shows how a glass medallion breaks in fractures like sun rays.

These glass drops and worms became known as 'Prince Rupert's drops'. The ‘glass bubble’ in the shape of a teardrop had the property that its thicker part could not be broken with a hammer, but breaking off the tip of its tapered end would shatter it completely. It was a well-known phenomenon on the Continent by the 1650s, and the glass bubbles were called ‘Dutch tears’ (lacrymae Bataviae or gocciole olandesi), possibly indicating their origin (likely Mecklenberg). These drops were introduced to the English Court by Prince Rupert on his arrival in September 1660. In March 1661, Charles II sent some ‘glass bubbles’ to the Royal Society for examination, and Sir Robert Moray reported on their properties and manufacture to the meeting on 14 August 1661.

Geminiano Montanari (1633-1687), professor of mathematics at Bologna and a close colleague of Malpighi's, sent to the Royal Society/Oldenburg in April 1670 his manuscript outlining his experiments with the glass drops and the cause of their properties. The Italian manuscript was eventually translated by Thomas Henshaw, and partially read at the meetings in April. This manuscript was probably a draft of Montanari’s Speculazione Fisiche (Bologna: Manolesi, 1671), in which he showed a long spiralled tail made at Murano (fig. 2).

27 October 1670, ‘There was also read a Latin letter to the society from Signor Geminiani Montanari, dated at Bologna 30 April 1670, N.S., expressing the singular esteem, which he had of their institution. [...] and intimating, that he had sent them a manuscript of his own composing, containing various experiments on the breaking of glass drops, together with his conjecture about the cause of that phaenomenon, a task imposed on him by the grand duke of Tuscany, the performance of which was now presented to the society. [...] It was ordered [...] that his letter be entered in the Letter-book, and his discourse about the glass-drops preserved likewise, after it had been perused and an account given of the contents of it; for which purpose were named Sir Samuel Tuke and Mr. Hoskyns, who divided those papers between them, and proposed to translate them into English’ (Birch 2:448).

2 February 1671, ‘[Mr. Oldenburg] delivered to Mr. Henshaw the Italian manuscript of Signor Montanari, formerly commended to Sir Samuel Tuke and Mr. Hoskyns for a translation of it into English; who having excused themselves from that work, the one because of his sickness, the other by reasons of his absence from London, Mr. Henshaw was desired to translate those papers, who promised to do it as soon as conveniently he could’ (Birch 2:467).

30 March 1671, ‘Mr. Henshaw gave in his English translation of Signor Montanari’s Italian manuscript concerning the phaenomena of the glass drops, and the cause assigned by him of them. It was ordered, that it should be read at the next meeting, and the members desired to meet precisely at three of the clock on account of the length of these papers’ (Birch 2:476).

6 April 1671, 'Mr. Henshaw read part of his translation of Signor Montanari’s paper concerning the glass drops: and as this discourse was long, and deserved consideration, fifty copies of it were ordered to be printed by Mr. Martyn, the society’s printer, that it might be the more conveniently distributed amongst the members for their perusal’ (Birch 2:476).

20 April 1671, ‘Mr. Oldenburg produced Signor Montanari’s Italian discourse on glass drops in print, with a second part; and said, that upon the receipt of this he had stopped the printing of the first part, which had been ordered 6 April. Mr. Henshaw was desired to translate into English this second part, as he had done the first; which he promised to do’ (Birch 2:477).
Supported by the De Laszlo Foundation
Powered by MuseumIndex+ CollectionsOnline