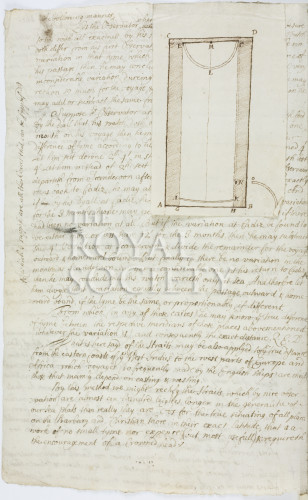 Instrument for measuring the length of the Mediterranean

Text discussing a method to measure the length of the Mediterranean with the use of longitude ('the philosophers stone in mathematicks', according to the author).

The image belongs to the second part of the text, which is an improvement on a previous proposal, detailing the different parts and uses of the instrument.

Image within MSS: 'Proposals for rectifying the Straits or finding the exact Length of the Mediterranean Sea'.

Equinoctiall (made according to the enclosed scheme) will doe much better. Let ABCD be a peece of ordinary firm board in breadth about 3 foot and above 6 foot long. Let EFGH be another board of fine wood 1/2 foot in breadth and 6 1/2 foot long. Let the last of these boards be fixt to the other by a pair of small hinges at the lower end, viz. GH so as that the \upper/ board may turn on the hinges and be easily raised to any height whatsoever. Let the Quadrant OP be fixt in the hole N by which the upper board may be quickly Raised to any desyred Angle of Elevation and there fixt (if occasion be) by supporters at its back. Let a small sharp pointed style of brass or steele be fixt in the joint M exactly perpendicular to the upper board. Let the semicricle E.I. F. [being a peece of the said brass] be truly divided inot 12 houres, and each house into 60. Then the segment IK (the part of a great circle concentrick with the semicricle ELF, and being also of inlaid brass) will serve to denote the seconds (which will be very requisit afor[sai]d experiment it exactly performed) for drawing smal (sic) Lines from the centre M throu every minut on the house circle and prolonging them to the segment IK, the distantce between each of those lines on the said segment (as appeared by a meer mechanical Tryall which I hastily made) will be such as may be easily divided into 20 parts, each of which will be ans[w]erable to 3" and that is as great exactness in Tyme as we need desyre in the nicest Operations. I prefer an Equinoctiall Dyall (especially such a one as now describ'd, showing seconds) before any other whatsoever, because one will serve. It being unviersall or fitt for any Latitutdes, if duly fixt.
Transcribed by the Making Visible project