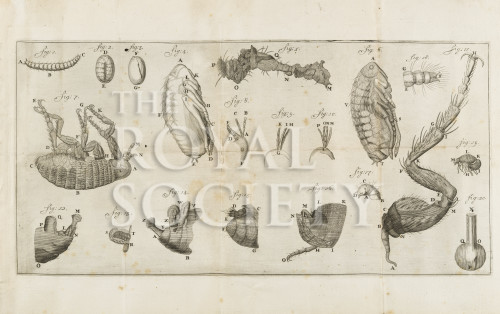 Anatomy of a flea

20 figures attached to a printed letter from Antoni van Leeuwenhoek to the Royal Society.

Leeuwenhoek did not send an autograph letter with drawings to the Royal Society, but a printed copy and an engraving (see Alle de brieven van Antoni van Leeuwenhoek, ed. by a committee of Dutch scientists, 17 vols [ongoing] (Amsterdam: Swets & Zeitlinger, 1939- ), IX (1976), 207n1).

13 December 1693, 'a Letter of Mr Leeuwenhoeck, which came with a printed account of severall observations of his upon the parts, and propagation of fleas, was produced, and ordered to be gotten translated' (JBO/9/146).