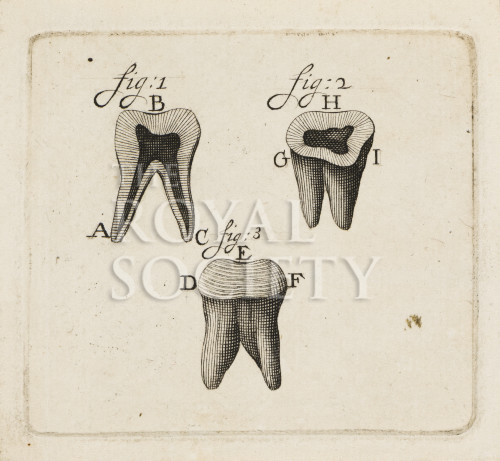 In a letter from Antoni van Leeuwenhoek to the Royal Society.
Van Leeuwenhoek sent these figures as printed engravings, he never sent the original drawings.

Van Leeuwenhoek received the human teeth from a grave-digger.

Fig. 1: a human tooth, which was rasped-off on one side up to the middle.

Fig. 2: a human tooth, which was rasped-off from the top.

Fig. 3: the wrinkles or ribbings on the top of a tooth.

I had ordered the Draughtsman (who is also an engraver) to draw the accompanying fig: most accurately, whereupon he requested me to allow him to cut the same in copper, because they were not easy to draw in red crayon; and this, then, is the reason why I am sending a print of the same (Alle de brieven, p. 221)
Transcribed by the Making Visible project

At the meeting of the Royal Society on 13 April 1687, ‘Part of Mr. Leewenhoeck’s letter of April 4, N.S. was read concerning the structure of the teeth, which he found from microscopic observations in all animals to be made up of bony vessels and pipes, which all take their rise from the inside or cavity of the teeth; and that all these vessels have their particular blood-vessels, that feed them, and convey nourishment to them. And the obstruction of these bony pipes he conceived to be the cause of the rotting of the teeth and the exceedingly acute pain of the tooth-ach. The rest of the letter was ordered to be translated’ (Birch 4:531).

On 27 April 1687, ‘The latter part of Mr. Leewenhoeck’s letter of the 4th of April was read, wherein he farther prosecuted the inquiry into the make of the teeth of several animals’ (Birch 4:533).