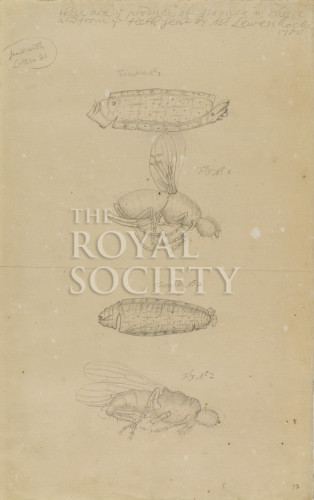 Larvae and pupae of cheese flies

Four figures in a letter from Antoni van Leeuwenhoek to Hans Sloane.

The drawings are believed to be made by Henry Hunt, keeper of the Royal Society's library since 1696, according to the archive reference as well as the editors of the Van Leeuwenhoek letters.

Van Leeuwenhoek does not mention drawings in his letter (whereas he usually refers to them extensively), yet he mentions that he sent the original flies and pupae with his letter, folded in small pieces of paper. It is therefore believed that he did not send images with this letter, but that the images were made in London, potentially from the specimen he sent.

The top of the page reads:
These are the produce of Maguts in Cheese
and from the teeth sent by Mr Lewenhocke
1700
Transcribed by the Making Visible project

13 November 1700, 'A letter from Mr Anth: van Lewenhoek dated Delft Sept the 7th 1700 to Dr Sloane was read in which he gave a full account of the production of two maggotts, one of which was taken out of a tooth, the other out of cheese, which afterward turned to flyes together with the generation of these small Insects and the sketches of them, which were delivered to Mr Hunt' (JBO/10/200).