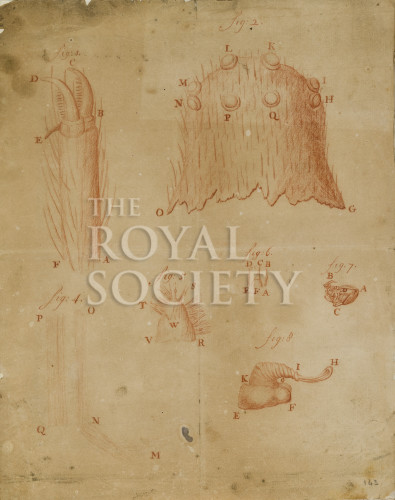 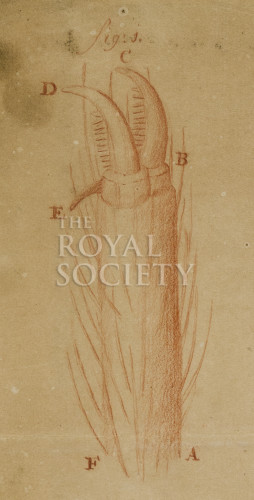 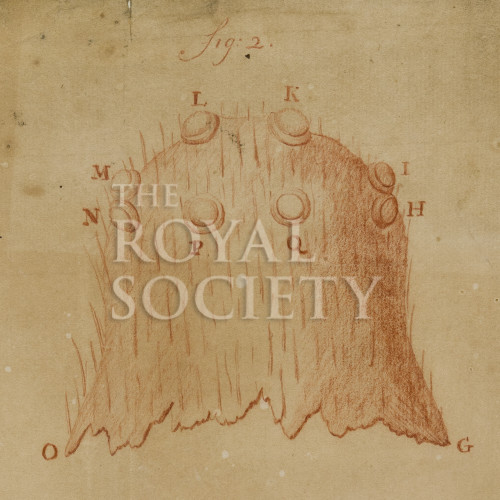 Seven images in a letter by Antoni van Leeuwenhoek to the Royal Society. Leeuwenhoek had the images drawn up for him.

Fig. 1: small part of a leg of a spider.
Fig. 2: part of the carapace or front of the spider.
Fig. 4: some threads from the spider. (Leeuwenhoek asked his draftsman to draw the threads, who responded that they are so small that it would be hard to draw them in red chalk or pen, but that it would be possible to some extent to engrave them in copper.)
Fig. 5: one of the four 'tools' on the body of a spider that makes threads.
Fig. 6: organs from where threads appear.
Fig. 7: a spider on its back.
Fig. 8: the little hook on a spider's abdomen from where it laid eggs.

Printed as figs 1-8, anatomy of spider in A. Leeuwenhoek, ‘Concerning spiders, their way of killing their prey, spinning their webs, generation, etc.’, Phil. Trans. vol. 22, no. 272 (July 1701), pp. 867-81. [NB the pagination of this article runs from 867 to 882 and then continues with a duplication of the numbers 875 to 881, i.e. a total of 23 pages.]
‘I caused the limner to look at some of the threads, as they came out of the spider’s body, who was forced to own that there was no describing them either with pen or pencil and that they could hardly be engraved on copper plates, however I have sent them as well done as I could’ (p. 873).
'In the said Figure [5] at W the working instruments stood as thick by one another as they do between R and S, but because it is opposite to the sight, and consequently was not easily to be distinguisht, I order’d the limner to leave that place empty. […] I made the Limner turn this instrument about, to have his opinion how many quills or reeds he thought there might be, upon which he told me that the number was above one hundred’ (p. 876 [first occurrence of page no.]).
'The teeth mentioned in it may be seen in the Repository of the Royal Society in Gresham Colledge' (p. 881 [second occurrence of page no.]).

The Journal Book mentions on 6 August 1701, 'Mr Leeuwenhoeck's Letter containing a large account of Spiders, their Instruments for spinning their Webs, killing their Prey, &c was read. It was thought very curious, and he was order'd the thanks of the Society' (JBO/10/226).