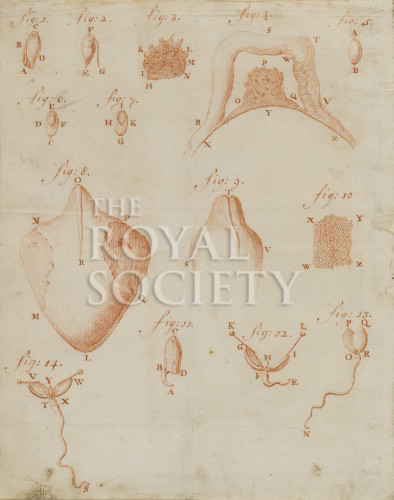 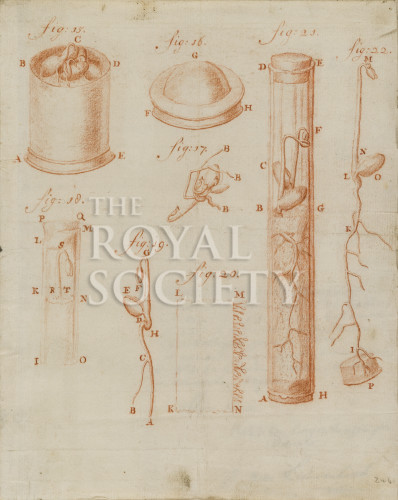 Observations of the structure of orange pips from Surinam and Curacao

22 images in a letter by Antoni van Leeuwenwhoek to the Royal Society. The images were drawn by a draftsman.

Fig. 1: a seed from a Surinam orange surrounded by its membranes.
Fig. 2: a similar seed without its outer membrane taken off.
Fig. 3: a transverse cut through FG from fig. 2 (with microscope).
Fig. 4: another transverse cut through the string but with the hard rind that surrounds the string (with use of microscope).
Fig. 5: a pip without its membranes which only encloses one plant.
Fig. 6: a cut through orange pip in which a second pip is present.
Fig. 7: the other half of the pip in fig. 6.
Fig. 8: an enlarged detail of C in fig. 6.
Fig. 9: the two largest leaves visible (in the same pip as fig. 8, but slightly turned).
Fig. 10: the structure of the pith as already visible in the inside of the smaller leaves.
Fig. 11: after several days the roots became visible (AB).
Fig. 12: a seed without its membranes, after laying for six days in warm sand.
Fig. 13: the root after 12 days.
Fig. 14: the two parts of the pip separated by pins so that the inside can be seen better.
Fig. 15: the small copper box in which Leeuwenhoek had been carrying around the pips in warm sand, and showing how here after 18 days, that had risen to the top.
Fig. 16: the lid of the copper box.
Fig. 17: an exceptional seed that brought forth three plants (A A A).
Fig. 18: a glass tube in which the experiment was continued: with five or six seeds per tube with some moistened sand in-between the seeds.
Fig. 19: The same plant as drawn in fig. 18, but now out of the glass.
Fig. 20: the root of that same plant enlarged by a microscope.
Fig. 21: a slightly wider and taller glass tube with moistened sand up to BG.
Fig. 22: the plant after about six weeks in the glass tube.

The Journal Book mentions on 14 April 1703, 'A letter was read from Mr Leeuwenhoek concerning the seeds of Oranges, &c. He was ordered to be thanked' (JBO/11/18).