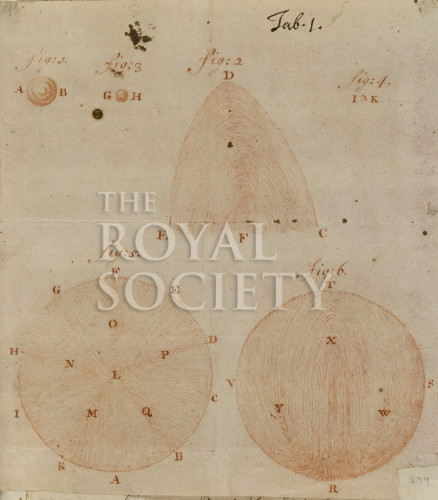 Observations of lens (crystalline humour) of a whale

Six images in a letter by Antoni van Leeuwenhoek to the Royal Society. The verso side of the paper is entirely covered in red chalk, most likely for the copying of the images. Leeuwenhoek had these drawings made by a draftsman.

Leeuwenhoek received two crystalline humours (or lenses) of two different whales through Mr Frederik Wolfert van Overschie (1655-1727), a town mayor of Delft, who had received the lenses from a commander on a Greenland mission. Leeuwenhhoek also had one more lens from a labourer who brought the lens to him saying that he had received it from a friend who just returned from whaling.

Both figs 5 and 6 actually depict a leader ball which Leeuwenhoek had wrapped with a single string just as he had observed the fibrous matter in the lens of the whale, so that he could let his draftsman draw it.

The Journal Book mentions on 25 October 1704, 'A Letter was Read from Mr Leeuwenhoeck concerning the Chrystalline Humor in a Whales Eye' (JBO/11/55).