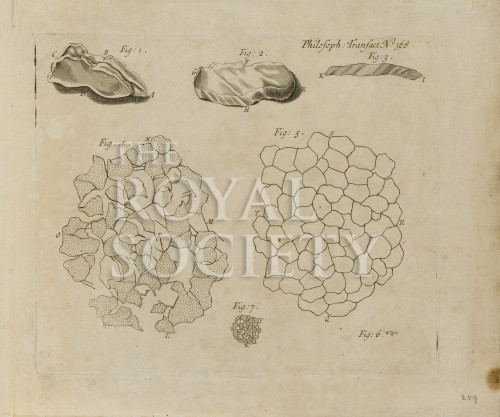 Observations of the muscular fibres of fish

Seven engraved and etched figures. The original drawings can be found in LBO/16/203. These are the figures as they were printed for the Philosophical Transactions of the Royal Society, vol. 31, no. 368 (1721). Leeuwenhoek had the images drawn for him.

Letter by Antoni van Leeuwenhoek to the Royal Society.
The letter was read to the Fellows at their meetings on 8 March and 11 April 1721.

Fig. 1: two small muscles from a codfish.
Fig. 2: a single muscle from a codfish.
Fig. 3: after a few days of drying, Leeuwenhoek was able to split the muscles into slivers, one depicted here.
Fig. 4: muscular fibres, cut transversely, observed with a microscope.
Fig. 5: circumferences of muscle fibres after putting a drop of water on the dried specimen.
Fig. 6: is half a millet seed, as indication of scale. Leeuwenhoek's draftsman told Leeuwenhoek that fig. 4 is in reality smaller than half the millet seed.
Fig. 7: for comparison, a small bit of muscle from a cow showing the difference in the size of the fibres between the fish and cow.

8 March 1721/2: 'Part of a Letter from Mr. Leeuwenhoeck dated at Delft the 11th of April last was read, wherein he related what he had observed upon viewing the muscular fibres of the Cod-Fish with a microscope and particularly of the vast number of vessels of which these parts are composed, as well those that run along in the course of the fibers, as those others which run cross and take their origine from the membranous coat of each fibre and then penetrating into the body of it so afterwards by various ramifications lose themselves in the coat again, after the same manner as the Arteries which rise from the heart after various ramifications coalesed at last with the veins and then return back to the heart again' (JBO/13/170).