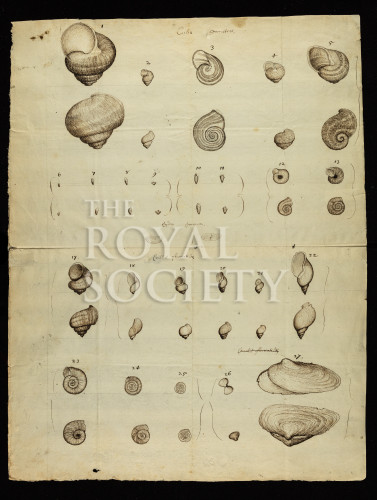 Figures of snails done by William Lodge for Martin Lister, who included it in his letter dated 12 March 1673 at York to Henry Oldenburg. The letter included classification of the figures of snails and a discussion by Nathaniel Johnston (1627-1706) of 'animal stones'.

At the meeting of the Royal Society on 2 April 1674, ‘Mr. Oldenburg read a letter to himself from Mr. Lister, dated 12th March, 1673/4, giving an account of an observations of Dr. Johnson of Pontefract, concerning some stones of a perfect gold colour found in animals’ (Birch 3:132).