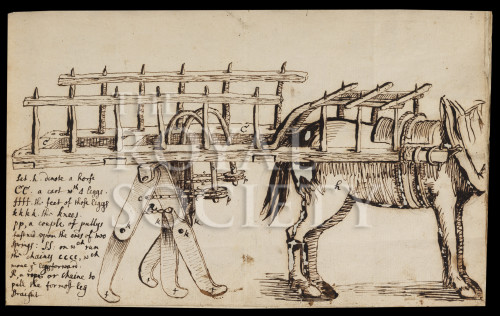 A cart with legs

Robert Hooke's reconstruction (with improvements) of Francis Potter's design of a 'cart with legs'. Potter had written to John Aubrey on 22 February 1663 and the letter was read at the meeting of the Royal Society on 4 March 1663 when Robert Hooke was asked for his opinion about it. Hooke's verdict, read on 18 March 1663, can be summarised by his opening remarks that a cart with legs is not so convenient or useful as a cart with wheels.

Hooke used the first letter of each part of the image as a key (rather than using letters in alphabetical order).

'Let h denote a horse
CC a cart with 4 leggs
ffff the feet of these leggs
kkk the knees
pp, a couple of pulleys fasten upon the end of two springs SS on which run the chains ccc, which move the leggs forward. R, a rope or chaine to pull the formost leg straight.'

Some considerations on the Invention of a Car with Leggs.
The Invention of Cart with leggs, though it has very much of Ingenious contrivance, yet it's conceived not practicable: and though it were yet noe ways soe convenient & usefull as a Cart with wheels. ...
Transcribed by the Making Visible project

At the meeting of the Royal Society on 4 March 1663, ‘Mr. Aubrey presented the society with the scheme of a cart, with legs instead of wheels, devised by Mr. Francis Potter; which was referred to the consideration of Mr. Hooke, who was ordered to bring in a report of it to the next meeting’ (Birch 1:206).

18 March 1663, ‘Mr. Hooke’s account of the cart with legs, brought in by Mr. Aubrey from Mr. Potter was read, and ordered, with some alterations, to be sent to the author of this invention. Mr. Hooke was also ordered to draw up a full description of this cart, together with a scheme of it, that it might be entered with the animadversions up it’ (Birch 1:207).