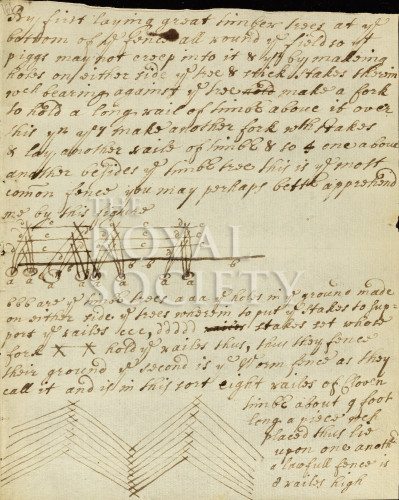 Diagrams of two types of wooden rail fence used in colonial Virginia, with one inset detail. The upper figure (figure 1) is described as a series of crossed poles or stakes sunk into the ground astride embedded logs. The intersections of the stakes support horizontal rails, shown in the detail drawing.

From the papers of Robert Boyle.

John Clayton (c.1657-1725), natural historian and clergyman, was elected a Fellow of the Royal Society in 1688. Clayton joined the British colonial forces in Virginia in 1684 to become rector of James City Parish in Jamestown.

Robert Boyle (1627-1691), natural philosopher, was a Founding Fellow of the Royal Society. He was also Governor of the New England Company, and communicated avidly with missionaries distributed among British colonies, including Clayton.

‘…they now hedge with trails of Timber trees wch will not last past 6 or 7 years after all theire toile & whereof they will shortly stand in need. They have threy ways raileing in or fenceing their ground. By first laying great timber trees at the bottom of the Fences all round the field so the pigs may not creep into it & then by making holes on either side the tree & stick stakes therein wch bearing against the tree [hold – deleted] make a fork to hold a long rail of timber above….so one above another besides the timber tree. This is the most common fence .You may perhaps better apprehend me by this figure [figure 1 appears here]. bbb are the timber trees aaa the holes in the ground made on either side the trees wherein to put the stakes to support the railes ccc, dddd [railes – deleted] stakes set whose fork [detail drawing appears here] hold the railes thus. Thus they fence their ground. The second is the Worm fence as they call it and is in this sort eight railes of Cloven timber about 9 foot long a piece wch placed thus lie upon one anothr. A lawfull fence is 8 railes high [figure 2 appears here].’
Transcribed by the Making Visible project

Appears within ‘An account of Virginia’ by John Clayton.