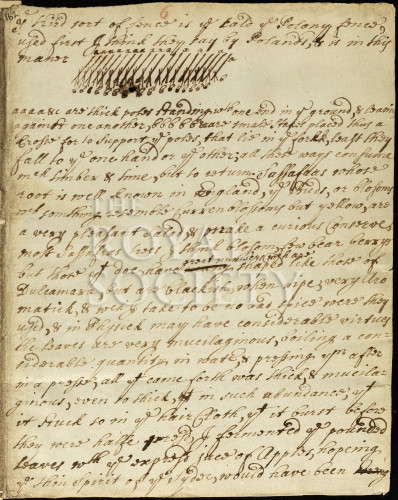 Diagram of a wooden fence used in colonial Virginia. The fence consists of long upright poles supported within the fork of two smaller supporting stakes, all driven into the ground in a repeating pattern. Known as a ‘Polony fence’.

From the papers of Robert Boyle.

John Clayton (c.1657-1725), natural historian and clergyman, was elected a Fellow of the Royal Society in 1688. Clayton joined the British colonial forces in Virginia in 1684 to become rector of James City Parish in Jamestown.

Robert Boyle (1627-1691), natural philosopher, was a Founding Fellow of the Royal Society. He was also Governor of the New England Company, and communicated avidly with missionaries distributed among British colonies, including Clayton.

‘The third sort of fence is the cald the Polony fence used first I think they say by Polands , & is in this maner [figure appears here] aaaa &c are thick poles standing wth one end in the ground, & leaning against one another, bbbbb &c are small Stakes placed thus a Crosse for to support the poles, that lie in the fork, least they fall to the one hand or the other…’
Transcribed by the Making Visible project

Appears within ‘An account of Virginia’ by John Clayton.