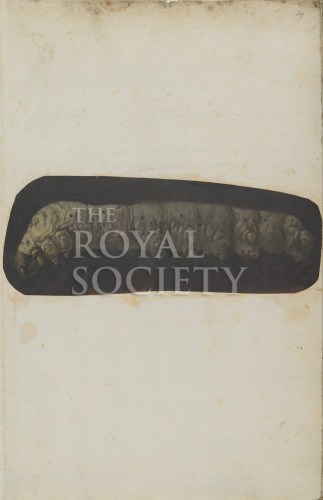 In 1667, the Bolognese physician Marcello Malpighi (1628-1694) was contacted by Henry Oldenburg on behalf of the Royal Society to start a correspondence. The Royal Society was especially interested in him observing silkworms and plants. Malpighi was straight to work and sent a full manuscript with drawings of his observations of the development of a silkworm into a silk moth to the Royal Society on 5 January 1669. It was presented to the Society on 18 February 1669 and published almost immediately.

The manuscript text and drawings of Malpighi's observations also contain this painted representation of a silkworm caterpillar. It is not mentioned in any of the correspondence and it is therefore unknown whether this image was sent by Malpighi or made in London. The artist is thus also unknown.

This image was not printed.

Marcello Malpighi, Dissertatio epistolica de Bombyce (London, 1669). This book was published with the imprimatur of the Royal Society, as signed by William Brouncker on 22 February 1669; it was printed and published in July 1669.

At the Society's meeting of 18 February 1668/9, 'Mr. Oldenburg brought in several papers: One was a packet sent to him for the society by Signor Malpighi, containing a manuscript history of the silk-worm, its whole life, and the anatomy of all the parts thereof, delivered to the society, consisting of twelve folio-sheets, and of as many microscopical draughts in folio. It was ordered, that the hearty thanks of the society be returned to the author by a letter to be drawn up by Mr. Oldenburg; and that he and Mr. Hooke be desired to peruse those papers, and to make a report thereof to the society at their next meeting; and that the considerations of publishing them be referred to the council' (Birch 2:348).

At the Council meeting of 22 February 1668/9, it was ordered, 'That the history of the silk-worm, written in Latin by Signor Marcello Malpighi, and dedicated to the society, be printed forthwith by their printers, and that notice be given to the author of this order; the form of which order to be as follows: "Tractatus, cui titulus, Marcelli Malpighi dissertatio epistolica de bombyce Soc. Regiae dicata, imprimatur à Johanne Martyn et Jacobo Allestry, dictae societatis typographis. Brouncker, P.R.S."' (Birch 2:349).

At the Society's meeting of 25 February 1668/9, 'Mr. Hooke reported, that he had perused Signor Malpighi's discourse of silkworms, and found it very curious and elaborate, well worth printing. This was seconded by Mr. Oldenburg, who thereupon read the letter, which he had drawn up for Signor Malpighi, thanking him for his great respect in dedicating the said discourse to the society: which letter was approved of, and ordered to be entered in the Letter-Book' (Birch 2:350).

At the Society's meeting of 4 March 1668/9, 'Signor Malpighi was proposed by Mr. Oldenburg for a honorary member, and elected as such nemine contradicente, he having by his letters and the dedication of his dissertation on the silk worm expressed a singular respect for the society' (Birch 2:352).

At the Council meeting of 3 June 1669, 'The Latin preface composed by Mr. Oldenburg, and to be prefixed to Signor Malpighi's dissertation on the silk-worm, was read, and approved' (Birch 2:376).