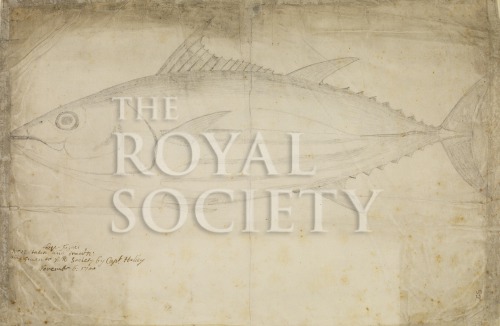 Side view of a variety of Atlantic tuna [Thunnus], inscribed below in ink: 'these Fishes were taken and drawn : and given to the R. Society by Capt. Halley November 6: 1700.'

This is one of a set of sketches Edmond Halley made during his voyage to the South Atlantic as captain of the Paramore (September 1699- September 1700), which was tasked to take readings of the variations of the magnetic needle in the Atlantic Ocean to improve navigation. (See Alan H. Cook, Edmond Halley: Charting the Heavens and the Seas (Oxford: Clarendon Press, 1998), pp. 256-91.)

On his return, Halley submitted his sketches to a meeting of the Royal Society on 6 November 1700. The sketches were placed in the Repository.

these Fishes were taken and drawn: and given to ye R: Society by Capt. Halley November 6, 1700
Transcribed by the Making Visible project

At the meeting of the Royal Society on 6 November, 1700, '[Captain Halley] produced several sketches of fishes, and of the Batavian Islands, for which he was thanked, and the sketches ordered to be put into the Repository. The fishes were of two sorts of flying fish &c.' (JBO/10/198).